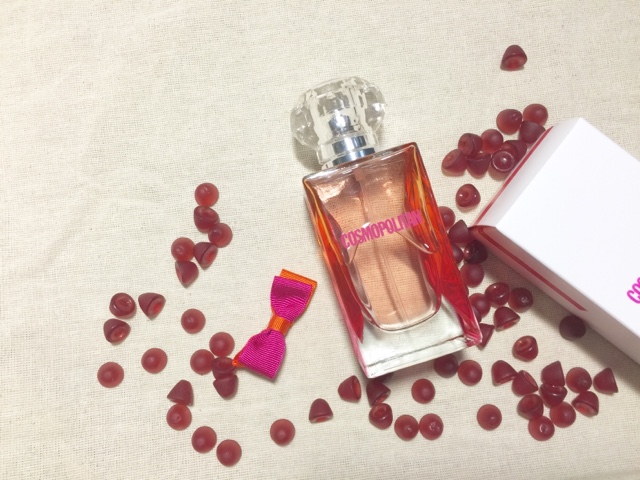 Coming home after a holiday for my birthday was quite depressing but unwrapping this beauty made me smile. The new Cosmopolitan Fragrance (Eau De Parfume) reminds me of a scent I used to have when I was younger, however its more grown up.


It has a refreshing fruitiness that makes me crave Jols (yes, I'm eating them while writing this). It's also florally yet woody; a spot on scent for young women who want to steer away from sweet fragrances for teens.

Design
The beautiful crystal faceted glass bottle will warm my dressing table and when it runs out I'll happily keep it for decoration. I have a habit of hoarding beautiful things. 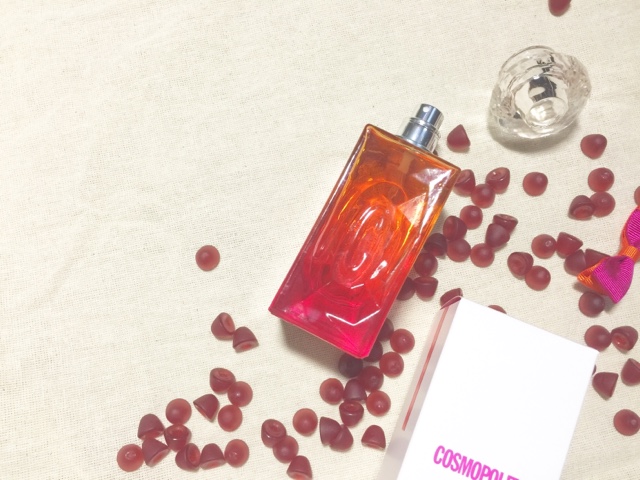 Cons
A downside is it doesn't last the whole day but if you're like me, I can be stingy with pricey perfumes, and before you know it they go off and smell like drunk old man breath wearing cheap cologne (FYI, it's a metaphor, not from experience).

Since I'm not a crazy purfume girl, receiving a compliment from Christian should be a good thing. He thought I was unusually fancy - suspicious even. ;) Thanks Cosmo!

Here's a quick way to use my Photostory in the classroom (excuse the vocab, it's too early in the morning):

Fairy Tale Genre (adapt for all year levels)
Compare alike and different:
Using what they've learned about Fairy Tales and comparisons to existing fractured fairy tales, have students create their own fractured tales.
After selecting a favourite fairy tale, students can start writing a twisted version of the tales. Encourage them to invent new titles that still hold true to the original title.

Extension 1:
Discuss what makes a good picture book and requirements needed for a book to be published.
Create picture book: Students create illustrations (either draw or on computer) to create a picture book for publishing. 12-16 pages.

Extension 2:
Show students examples of Photo stories (eg. Jason and the Beanstalk). Discuss similarities and differences to the original fairy tale and thoughts on the photostory.

Create Photo story: If illustrations aren't digital, scan them to put onto the computer. Use a photo story program or Movie Maker to create a Photo Story.

Matching a screen saver to a cool iridescent ring that I made. Made to order.
Contact me for more details. Anne X 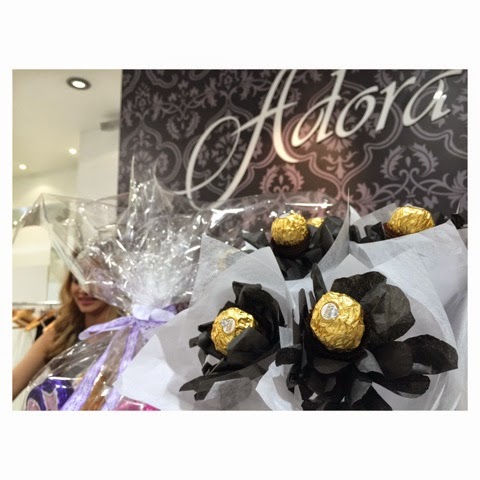 Adora store's official grand opening was held a couple of weeks ago. The celebration filled City Cross Arcade with the disgusting smell of freshly popped buttery popcorn, and don't get me started on the horrible candy bar (sarcasm of course). Like I said on Facebook, candy bars in Fashion stores are dangerous. As a indecisive girl, it takes me 200X the time it takes the average girl to make a decision: so fuel me with sugar and I'll have enough energy to try on the whole store! 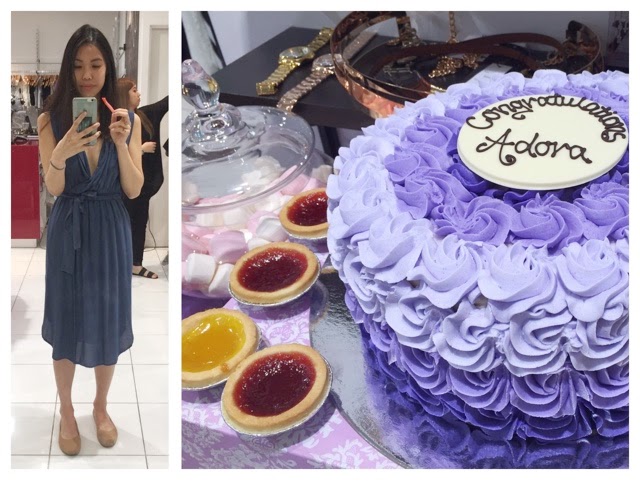 The clothes are mostly aimed at young women, ranging from flattering A-line midi skirts for work, to bodycon dresses for nights out in town.
The sweetest manager, Quin was so helpful. Since it's now autumn, I wanted something that I can layer but also be suitable for teaching. She helped me make a decision between the black and the grey sweater. 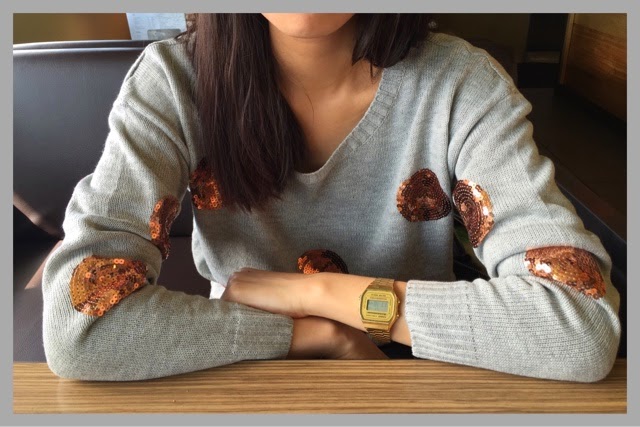 What do you think? A word of caution, if you see me wearing this you'll get an itching urge to dance. I'm a shiny discoball!
If you're ever in Rundle Mall, pop into Adora in City Cross Arcade. If you can't find something your size, don't hesitate to ask the sales girls.
Peace,
Anne x
Posted by ANNE at 4/23/2015 12:17:00 am 0 comments 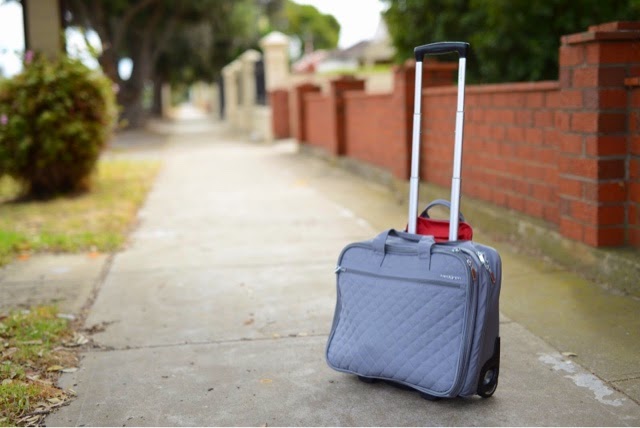 Hedgren Cindy Trolley
The older I get the more I'd rather prevent injuries and if this means pulling along a trolley instead of using a tote then I'm in. I'm no body builder so my arms and shoulders turn into jelly after lugging stacks of books around school.

A couple of weeks ago I was extremely lucky to recieve a Cindy trolley by Hedgren in the new season colour Mouse Grey to review. Who would have thought that I have been desperately re/searching for my perfect teacher's bag for months prior. Talk about coincidence!

The Cindy trolley is part of Hedgren's Diamond Touch collection; a business bag collection for a busy girl like me. 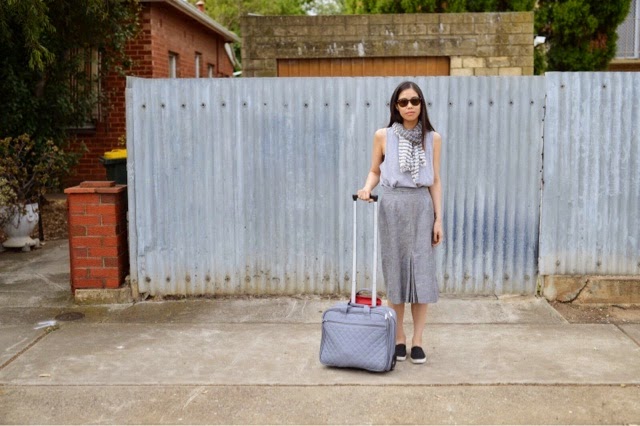 Look + My Outfit
The new season Mouse Grey is a much needed addition to the classic black or red options. Personally I love the colour (shade). Grey is the ultimate neutral; it can be worn dressed up or down. As you can see from my (teacher) outfit (minus sleeves), wearing all grey doesn't have to mean you'll be mistaken for a statue street artist. The key is to play around with the textures and shades all 50 Shades thanks to my scarf. OK I take that back. The lining is Hedgren's signature red which makes things more interesting and most importantly, faster! If you see a grey and red blurr wizz past, that'll be Ms Bahn. 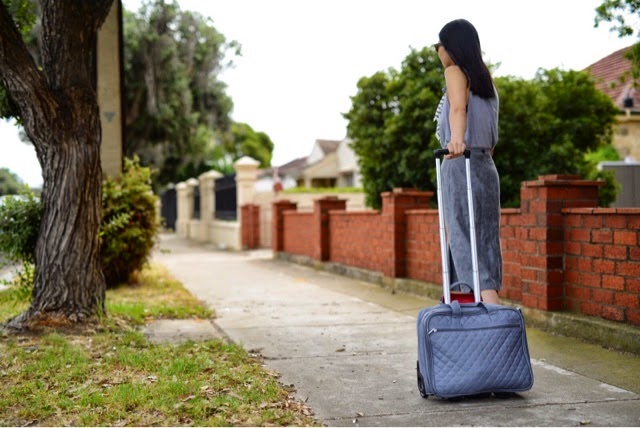 Function
The bag pulls along so darn smoothly yet like with all trolley bags I sound like I'm off to a holiday (in the staff room). The sturdy double telescopic handle locks at maximum and when pulled along, is perfect for me; (what is the perfect angle you ask? Find the length between my hand and heel (while walking), height of bag, length of heel to bag, use SOH, This is wrong and I'm tired)  which means no more heel-to-bag contact. It also locks into place and is released with a button, so I have control over when it collapses, not the other way around! 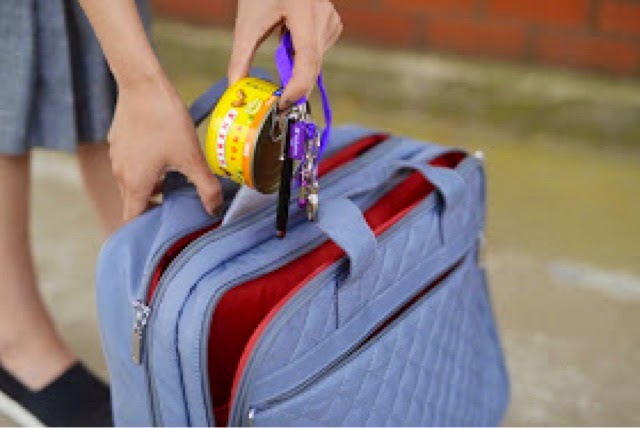 Features
I can fit a thick folder and my large pencil case into the main back compartment, which zips all the way down for easy access. It also has a padded compartment for my iPad. In the middle compartment, I keep things like my lunch (that's my emergency can), hat, snacks/lollies and wipes. 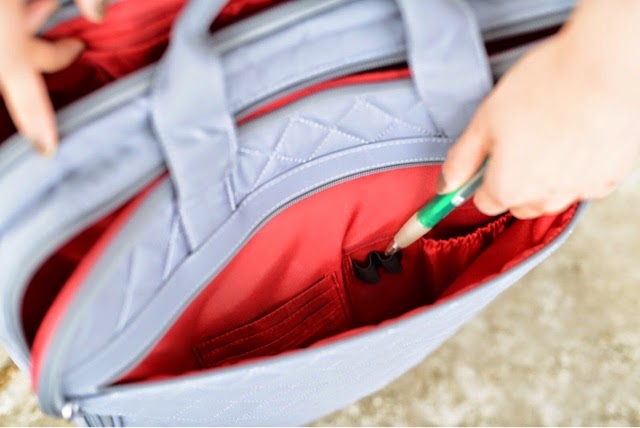 The handy organiser at the front is perfect for storing frequently used things that I need quick access to such as pens, gum, lipstick and keys. It also has a mobile phone pocket that is just (hooray!) big enough for my iPhone 6. The bag also comes with 2 years warranty and is apparently water repellent; which deserves a tick and a sticker!
For product specifications see Hedgren's website.

Verdict
Hedgren's Cindy trolley is a great business bag that I can confidently say will join me on adventures across school grounds for a very very long time. The only downfall is that there is only enough space for what I've mentioned above so far. As a teacher I carry around a extra things such as a diary, school laptop etc; funnily enough though, I'm lazy so I hardly ever fully zip up my bags anyway, so that's not a big problem.
Of course the Cindy trolley will suit anyone with any occupation (oh where was she when I lugging around all those text books as a student), but since she is a teacher's bag, I'm calling her Ms Cindy from now on.

Thank you for saving me from (fingers crossed) any unnecessary trips to the physio Hedgren!
To teachers/ business people/ shopaholics out there, what trolley bags do you use/recommend?
Peace,
Anne
Photos taken by Christian Polychronis. 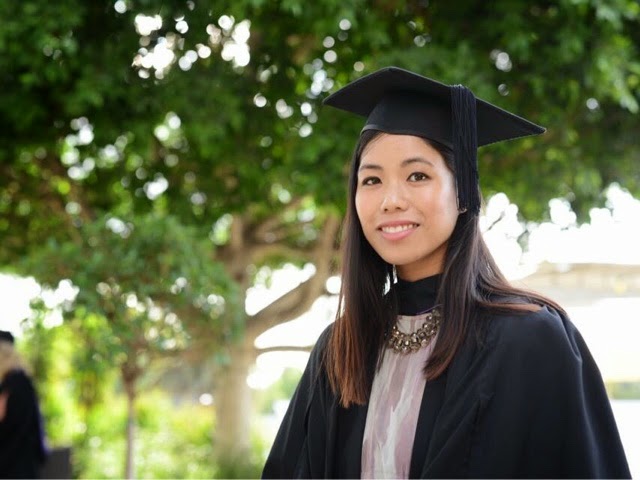 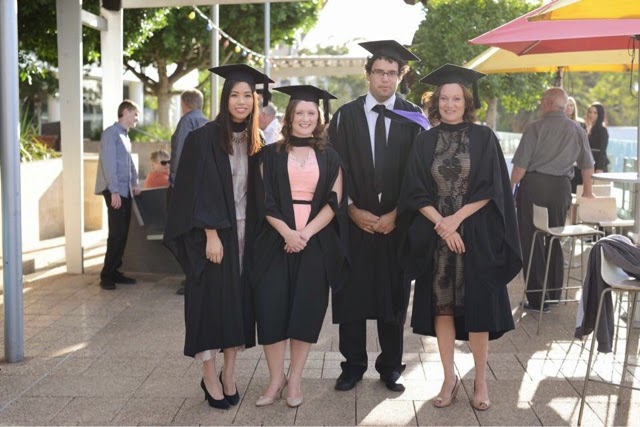 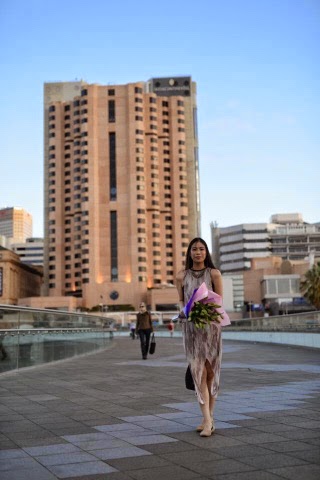 I did it! I have a BA Education (Primary & Middle) from UniSA.

Everyone keeps asking how it feels to finally graduate, so to explain myself again it felt good to get my 5 minutes of fame; it's another birthday for the year I guess. In terms of finally finishing University, I felt relieved and excited in October last year when I finished my last course, got my Teachers Registration and could finally earn some decent cash.

Oh, don't you worry; I'll keep sharing my cheap eat hacks and budget friendly anything. Of course relief teaching isn't constant but I'm happy so far. Yes, there are days when I want to slap a student (haha) but it's so rewarding. I love my job!

Vistaprint is the Costco of the online digital printing world. I recommend having a thorough Google search for the best deals as there are dozens of them going on at one time. Don't settle for the first one you see.
A couple of years ago I purchased some business cards from them. From memory they were $10 plus postage for 250. I roughly designed the network cards for our trip to Sydney Fashion Week. And when I say "roughly" I mean so last-minute that I had to stop myself from always apologising to Social media Celebrities about the misspelling of "photgoraphy". Lesson of the day: proof read, edit, sleep on it, then proof read again! It's no wonder it looks like I still have a full box of cards.
Two years later, I now need business cards for relief teaching. I've been advised to leave cards at schools (with permission) and one along with the feedback you leave for the classroom teacher. I've been meaning to make one for months, but since the deals are always for a limited time only, I've never been able decide on a design on time.
I wanted more than just a disposable business card, so creating a quote on one side means it can be displayed. The turn-over symbol hopefully reminds them that there is something at the back. I used an app called ArtStudio (Purchased for around $5.99?). It's a simple "Photoshop" like app. After finally deciding on a quote, I used a photo Christian took of the night sky in Balmoral. How cool is it? I then played around with fonts to make it a bit more funky. I hope it's not too hipster. 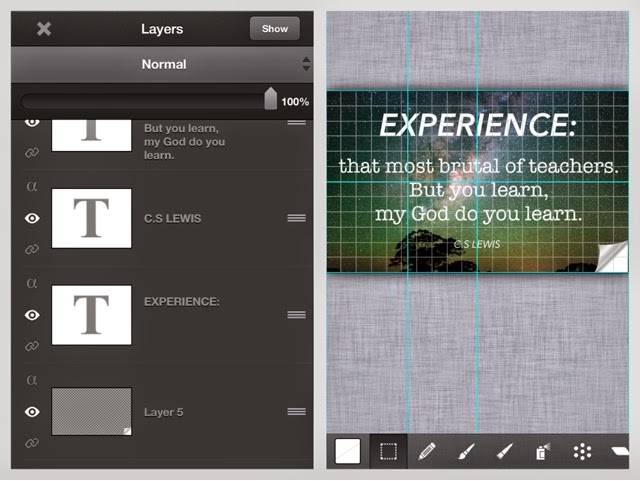 On the info side I put my picture, usual contact details, availability and ID numbers. 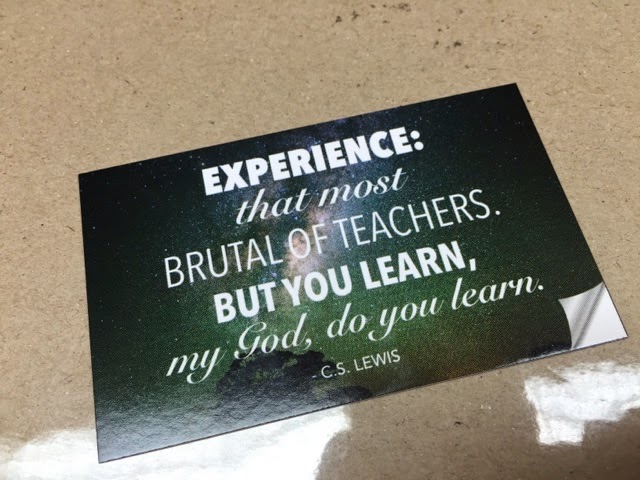 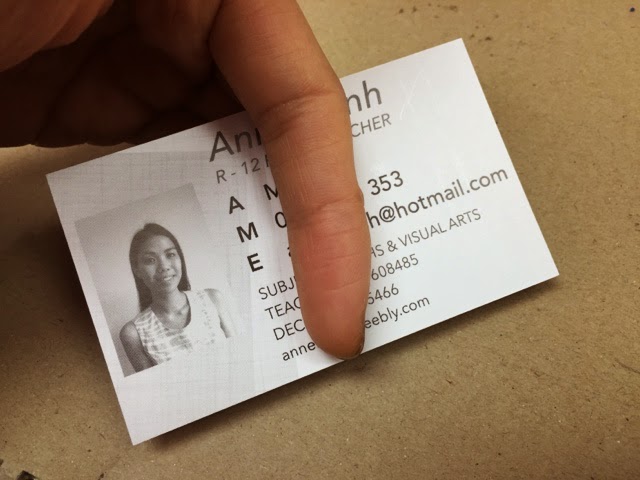